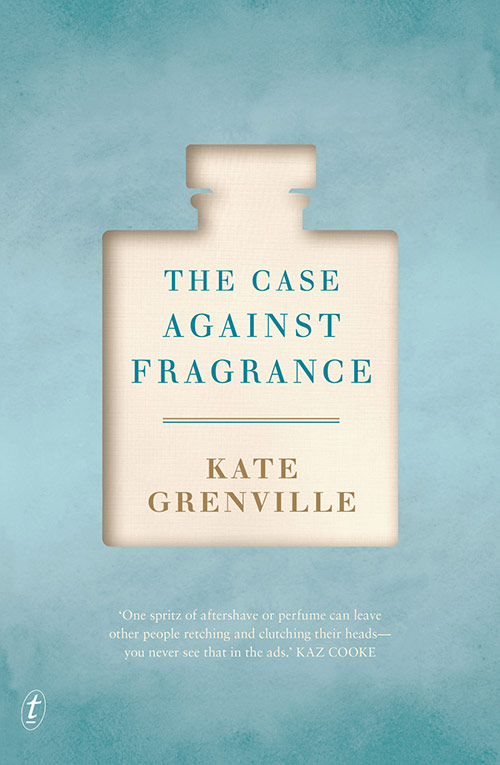 The Case Against Fragrance

The Case Against Fragrance is a departure for me and probably a surprise for readers of my other books. Why would a novelist turn her hand to a non-fiction book on the subject of fragrance? The answer is that my life is being increasingly blighted by the scents that are all around us these days – in perfumes and colognes, shampoos and cleaning products, air fresheners and room fragrances. All those things give me headaches that can make ordinary pleasures like going shopping, sitting in a cafe or seeing a movie no fun at all. I wanted to find out why.

Based on good science, the book gathers what’s known about fragrance and presents it in a user-friendly way.  The facts behind the glamour might surprise you.

When I was little, my mother had a tiny, precious bottle of perfume on her dressing table and on special occasions she’d put a dab behind her ears. The smell of Arpège was always linked in my mind with excitement and  pleasure—Mum with her hair done, wearing her best dress and her pearls, off for a night out with Dad.

When I got old enough to have my own special occasions I also had my favourite perfume. I loved the bottles: those sensuous shapes. I loved the names and the labels, so evocative of all things glamorous. Above all I loved what they promised: elegance, beauty, poise and—of course—desire. I’d set off for a date in a cloud of scent, feeling sumptuous and sexy. (The boys I was dating were enveloped in their own cloud of Old Spice, a smell forever associated for me with the slippery back seats of cars.) The boys never commented on my perfume, but one day a woman I envied for her smartness and stylishness exclaimed to me, ‘Oh, you’re wearing White Linen!’ and I basked in her tone of respect and admiration.

I couldn’t understand what happened a short time after I’d sailed out of the house in a cloud of scent. For half an hour I’d feel sumptuous and sexy, and then I’d get a headache. My eyes would get dry and sore. I’d get congested in the nose. I’d just want to go home. Was it the strain of being sumptuous and sexy? Did I have some sort of phobia about going on dates? If I thought about it at all, it was to blame myself.

Thinking back, it might even have been one of the things that made me a writer. You don’t need to sit in a cloud of elegance when you’re alone at the desk trying to think of another way of saying ‘he said’.

Over time, the perfume bottle gravitated from the top of the chest of drawers into the undies-and-bras drawer. I never made a conscious decision, never really thought about it: but somehow, by the time my children came along in my thirties, I’d stopped using scent.

It was around then that a friend came back from Europe with a pretty little bottle of something. ‘I thought this would suit you,’ she said. ‘I thought you’d like it.’ I didn’t know whether it suited me or not, but I did know that, as soon as I dabbed it on, a headache started up. It was so immediate and so unexpected that it made me start to experiment. Finally, for the first time in all those years, I could see a pattern. When I used perfume, I got a headache. When I didn’t, I didn’t.

It was good to have that mystery solved: it wasn’t dates I had a problem with, just perfume. That was all right. Some people couldn’t bear the feel of wool against their skin, some people couldn’t stand oysters: I was someone who didn’t like perfume.

As the years went by I came to dislike other kinds of perfume, too: all those sickly fragrances in cosmetics, shampoo, cleaning products and air fragrances like scented candles and diffusers. By the time I was middle-aged I was looking for things that advertised themselves as ‘fragrance-free’ or ‘no synthetic fragrance’, and I was glad when people around me didn’t wear perfume or cologne. I had no problems with the scents of flowers, and small amounts of essential oils were okay, too. The problems seemed to be with the other sorts of smells. Whether you called the stuff fragrance, or scent, or perfume, and whether it came in an expensive little bottle with a French name, or as part of shampoo or soap, I avoided it when I could.

But these days it’s very hard to avoid fragrance, even if you don’t use it yourself, and eventually I realised that I was warping my life into some strange shapes in order to avoid those smells and the headache that would follow.  The unwelcome fact was that pretty much anything that involved being with other people in a confined space would mean a headache. That meant parties, concerts, a bus or plane ride, a shopping expedition, even something as simple as coffee with a friend in a café.  In all those places there’d be some source of fragrance:  strongly-perfumed people, or scented candles or air fresheners, or fragranced cleaning products.

But I’m a gregarious soul, and I didn’t want to become a recluse.  I needed to find out what it was about fragrance that was giving me these problems.  I realised I didn’t know much about it.  I thought it was made from flowers – wasn’t it?  And of course someone would have tested it for safety – wouldn’t they?

When you Google ‘fragrance headache’ you release a great chorus of voices – it was clear straight away that I wasn’t the only one affected by scent. In fact, it turned out that University of Melbourne research shows that one in three people has some kind of health problem from fragrance: headaches, asthma, skin allergies, nausea or the difficulty in concentrating that people call brain fog.   One in three! That was a surprise.  Then I came across a heavy-duty scientific study about fragrance, published in 2002 in the peer-reviewed scholarly Flavour and Fragrance Journal. Its summary was so startling I had to read it a few times to make sure it really said what it seemed to.

In spite of…widespread use and exposure, there is little information available on the materials used in fragrance. Fragrance formulas are considered trade secrets…Fragrance is increasingly cited as a trigger in health conditions such as asthma, allergies and migraine headaches. In addition, some fragrance materials have been found to accumulate in adipose tissue and are present in breast milk. Other materials are suspected of being hormone disruptors. The implications are not fully known, as there has been little evaluation of systemic effects…There is little governmental regulation of fragrance. The fragrance industry has in place a system of self-regulation. However, the present system has failed to address many of the emerging concerns.

I felt as if I’d innocently pushed open a door that I hoped would provide the answer to a simple question: why do I get headaches from fragrance? It had instead revealed a dark and dangerous landscape.

“Well-developed and thoughtful …Grenville builds the case that fragrance is having a significant adverse impact in modern society, through personal anecdote and peer-reviewed research. Fact-dense and extensively referenced, the book is a delight to read and never gets bogged down. Read The Case Against Fragrance and you will never think about fragrance in the same way again.  It you have been suffering in silence, you will know you are not alone.”
Ian Musgrove (Senior Lecturer in Pharmacology, the University of Adelaide), The Conversation, 16.2.17

“By 2015, Grenville was getting a headache from those stinky diffusers in taxis, from washing powder and from scented candles.  But instead of going mad, Grenville does what she does best: fixed her intelligent, discerning eye on the problem.  This reader started out sceptical and ended up convinced.  Read this, and gasp.”
Susan Johnson, Courier-Mail, 28.1.17

“Grenville, famous for her historical novels, has written one of her rare nonfiction books to get to the bottom of something that has been bothering her: the headaches that perfumes provoke in her… Her reading showed that her reaction to perfumes is not something quirkily personal.  It is relatively common for perfumes to cause headaches, nausea, asthma and more, and medical research is starting to put them in the same category as second-hand smoking.”
Miriam Cosic, The Australian, 18.2.17

“In this appealingly written exploration, Kate Grenville uncovers the dark side of the fragrance industry, from the carcinogens in aftershave to the hormone disruptors in perfume that mimic estrogen.  She also highlights the flimsy regulations that let under-tested fragrances into our babies through their skin, mouths and lungs.”
Sydney’s Child, Sydney, 1.2.17

“Grenville is celebrated among the canon of Australian novelists, but she’s also a lucid non-fiction writer.  In The Case Against Fragrance, she carries the weight of her topic lightly with simple prose and an easy narrative…Patrick Suskind wrote in his novel Perfume that the persuasive power of fragrance is “stronger than that of words” but Grenville’s moral case is potent.  “People have the right,” she argues, “to breathe air that doesn’t make them sick.” 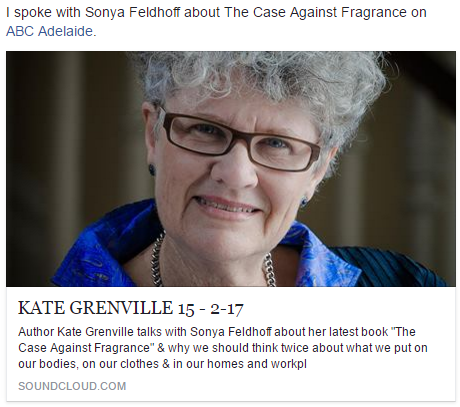