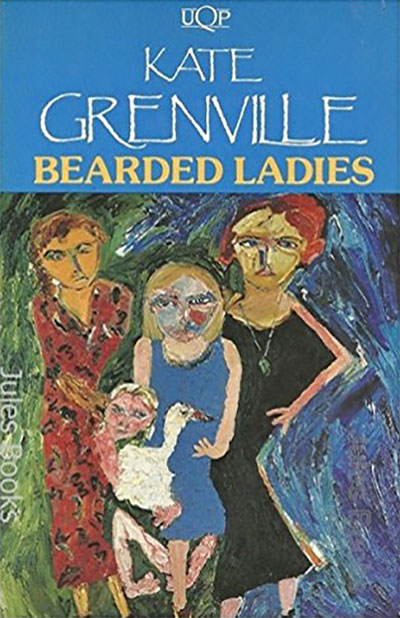 Bearded Ladies, a collection of short stories, was my first book, published in 1984. These are stories about women on the edges of things – women for whom society’s idea of what a woman should be doesn’t work. They know themselves to be something else altogether. Their beards are invisible – they can pass in the eyes of others as conventional women. But they know that they’re something less simple, but more truthful.

Bearded Ladies is published in Australia by University of Queensland Press.  It’s now available as a back-to-back edition paired with Dreamhouse.

This extract is the short story “No Such Thing as a Free Lunch” from the collection called Bearded Ladies. It is about 3 printed pages long.

No Such Thing as a Free Lunch
IT’S A FANCY PLACE in the way places are fancy here. Dim yellowish walls which anywhere else you might take the liberty of calling shabby. Ah – but the paintings! One doesn’t like to look naive and peer too closely, but clearly they’re originals, little gems dashed off by the masters, signed with a flourish. My compliments to the chef and to Claude for his wonderful restaurant. The lights are dim but of course no mere vulgar pink. This, my dear, is the dimness of quality. Among the sparkling white linen and the shadowy old chairs – old but good – large elegant men sit back at ease with a bottle of de Rothschild still half full in front of them. Poised women sparkle discreetly, leaning languorously, laughing in streams of silver bells.

Oliver does not, of course, expect me to exclaim aloud my awe or to shame him by clumsy colonial enthusiasm. Super cool now behind the black cummerbund of the maitre de. Skirt round this chair, don’t brush the tablecloth as you pass and for heaven’s sake try not to knock those flowers over. Chin up, back straight, now. No scurrying. Well done.

The chair is being pulled out for me and the oily face inclining with bogus respect. Madame? Slide in slowly now. Weight on the balls of the feet so that he can slide the chair in under me. Well done. What a team.

Oliver is of course totally au fait and absolutely au courant with this place. Evening Luigi, how are you this evening glad to hear it. Where’s Claude tonight I don’t see him. A few new faces I see. Well now what do you recommend tonight Luigi? The plovers’ eggs in sauce de la maison? Plovers’ eggs it shall be. That is, unless, of course . . . he inclines his smooth polished Public School face towards me . . . no that will be fine Luigi, two plovers’ eggs. And I think a bottle of the ’68 don’t you? Yes. Fine. Of course I come here pretty often you know. The odd business lunch and pleasurable um dinner. Nice quiet place. Bit pricey of course but utterly worth every penny.

At the next table a young man with pale eyes like a blind fish in a dead-white hairless face is talking steadily, calmly, without the slightest shadow of a doubt, to his companion who is elegant in black silk and blond coiffure. Her perfect face framed in the bell of her hair stares at him. She nods, murmurs. Absolutely oh yes. Quite. How amusing. Quite. Her dark eyes never leave his decomposing-flesh face. Oh how splendid. How absolutely. She leans forward to him, one hand supporting an elegant cheekbone, the other resting, forefinger pointing, on the table.

Oliver unfolds his napkin and arranges it in his lap.

Now we were talking were we not about Lear, without a doubt the greatest play ever written. Genius with a capital G. That strange quality not so very far from madness which we like to call Genius.

His voice is properly reverent in the face of Genius with a capital G.

I venture to differ. Hamlet, perhaps?

Oh no dear. You’re quite wrong about that. Without any argument his masterwork, his chef d’oeuvre as it were. Definitely his greatest. No. I was just talking to Hall about this very subject last week and he was telling me. No, I’d say you’ll have to look at it again. Ah the wine thanks Luigi.

The correct half-inch in the glass. Lift it to the light and peer at it with one eye. Swill it round in the glass. Sniff. Close eyes the better to appreciate this really remarkably fine aroma. Tilt the head back, toss it in and swill it around the back teeth before finally swallowing. Purse the lips. Yes lovely. Not quite up to the ’65 naturally but what would you expect?

At the next table the food has arrived. The long slender fingers delicately grasp the knife and fork and convey dainty morsels to the perfect mouth. Chewing discreetly, she nods and leans forward, swan-like, between mouthfuls, all intelligent interest. Her companion picks petulantly at his food and lifts a disdainful forkful to the blank hole of his mouth.

Well now what were we saying yes the Theatre. Of course the Theatre is without a doubt the highest form of art. No doubt that a fine piece of theatre played by truly professional actors well there’s nothing can touch it in terms of sheer artistry. Now the films. I know you work in the films. Well I’m sure there’s a lot of merit in certain films but you won’t convince me that it’s a medium in which art can flourish. Fine for a night’s simple entertainment of course absolutely. Quite hits the spot at certain times. And of course for the mass of people, the bulk of the population, well I don’t of course want to sound snobbish or in the slightest degree elitist but I’m sure you’ll understand when I say that some pleasures require an educated palate.

Another swig of wine hits his educated palate and he closes his eyes and leans back.

Now what would you call a really good film, I mean a film that’s not simply a piece of entertainment now I did see a good film a while ago, what was the name of it now. Remarkably fine film within the limitations of the medium. Now a film like that takes the medium to its highest point and there’s no doubt there’s a lot of merit in it, without a doubt that film is one of the masterworks of that particular medium. But compare it with a piece of true theatre and you’ll just have to agree with me.

I think you’ll find that these are really remarkably fine. You’ll enjoy these, no question of it.

Now you’re obviously an intelligent girl I’d be interested to hear your views on this. Clearly you’re not just a run of the mill type of person. Obviously you’re more intelligent than most and I’ll be interested in your opinion. Now the way I see it is this, you’ve got two distinct and separate things going on and only one of them can rightly be called Art. And of course there’s not a shadow of a doubt in my mind about that.

The plovers’ eggs are like the insides of golf balls.

Yes the chef here really is remarkably fine no-one to touch him in the whole of London. Now I was talking to Claude last week and I said Claude your chef is a treasure. I think you’ll agree that this is the finest food of its kind you’ve ever tasted.

Absolutely tip top Luigi up to the usual high standard do convey my felicitations to Pierre. I think you’ll have to agree that burp. Pardon me.

Now if you’ll just excuse me a moment. Bows slightly the embodiment of breeding.

The dead fish at the next table is also making his way to the door at the back. When he’s out of sight the immaculate blond slumps forward at the table and covers her face with her hands. Under the table I see her kick off a shoe and scratch the back of her leg with her toes. She sits for a few moments with her face in her hands hidden by the bell of her hair. She looks up at last, straightens her back, resumes the graceful listening attitude, takes a sip of wine. She catches my eye. Without cracking the perfect symmetry and beauty of her heart-shaped face, she gives me a slow patient wink from one brown eye. Then with a wide pink cat’s mouth she yawns – tremendously, tonsil-exposingly, eloquently.

“These stories are a delight. The writing is witty, satirical, compassionate, clear as a rock pool and as full of treasures.”
(Australian Book Review)

“Grenville writes powerfully . . . her women acquiesce in the illusions men wrap them in, but make a point of telling the truth to themselves.”
(Times Literary Supplement)

“These pieces are witty, cynical yet deeply moving portraits of relationships, with a light touch of wicked humour.”
(Ballarat Courier)

“Grenville’s language is as fresh as new paint.”
(The Age)

“With these 13 stories, a vibrant Australian voice speaks of universal concerns. This is a collection to be savoured as much for the colloquial ease of the writing as for the hypocrisy it exposes.”
(Publisher’s Weekly)

“The worlds of these stories are sharp and painful but told with great delicacy, with a controlled drift toward tenderness and back again. In welcoming Bearded Ladies, one can look forward to a further development of a considerable talent.”
(The Bulletin)

“Kate Grenville’s most memorable stories are those charged with a current of dark sexuality.”
(Overland)

“Grenville’s stories leave the reader with a strong emotional impact. Her style, while carefully worked, is deceptively easy.”
(The Advertiser)

“Not often enough do reviewers have the chance to hail a significant new talent. I have that pleasure with Kate Grenville’s first story collection. Don’t miss it.”
(The Newcastle Herald)

“Kate Grenville is a serious writer, and interestingly cosmopolitan. She writes a pared-down colloquial conversational language with an occasional astounding image and a fine sense of menace.”
(The Canberra Times)

“A bold black wit so spare that it is astringent, and uncluttered prose that sets down its stories of marginality and dislocation with an economy that brings Hemingway to mind.”
(Sydney Morning Herald)